People don't "get over" needle fear. Without FluMist, we need needle-free options.

When I lecture on needle fear, someone - a scientist, a doctor, a public health policy guru - inevitably says, "Don't you think parenting has something to do with it?" The last two decades have seen a 252% rise in the fear of needles. Innovations like FluMist and microneedles promise an eventual decrease in the number of pokes, but the news that FluMist isn't an option again for 2017-2018 is causing more distress to Gen Z than Gen X can imagine. Why, do older people wonder, are kids today such wimps? Where's the grit? 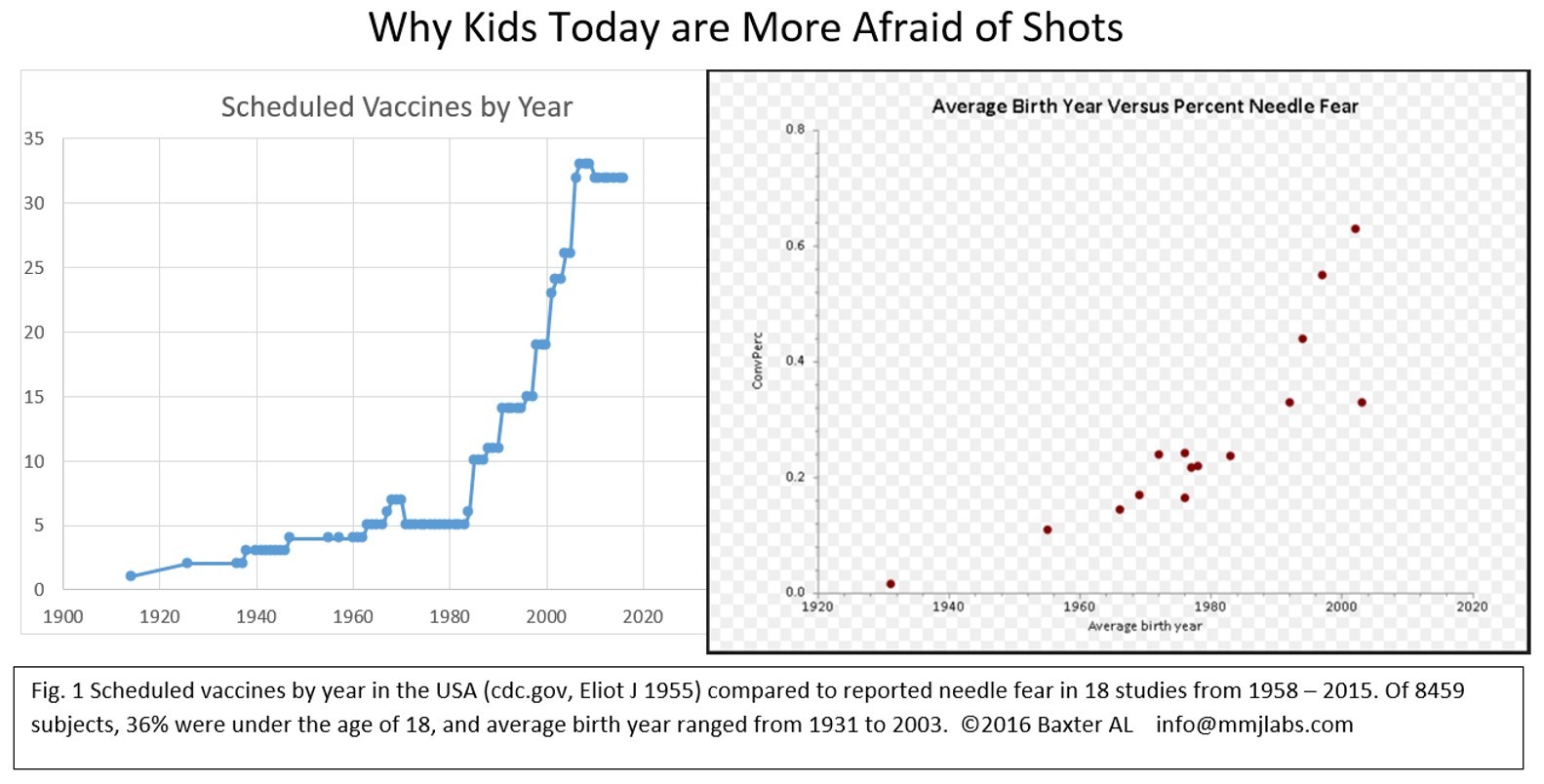 Here's the data: kids aren't wimps, they're conditioned. This graph shows the percent of needle anxiety by year of birth in a number of different studies. Compare it to the blue graph showing the rise in number of needles kids get over the years since 1983. Someone born in 1970 getting only a few vaccines as a kid might not understand why a young parent born in 1990 who got 20 pokes is opting out. The the 46 year old doesn't remember shots as being so bad... because they weren't. In 2012, 7% of parents said their needle fear influenced their decision to vaccinate. At that time, 24% of parents feared needles. What happens to herd immunity when the current 63% of kids who fear needles grow up & procreate? New research below suggests fear persists.

Before 1983, you got at most 5 scheduled injections as a child, administered before you were old enough to remember. If you needed one because you were sick, the mental association was with sickness and needles, not well health care. Kids today have a much stronger association with preventive healthcare and anxiety because they had a different association at the doctor than Norman Rockwell's patients did. A trip to the doctor then meant a kindly evaluation of how you felt and an affirmation that you're growing big and strong! Now the association is, "Do I have to get a shot?" We're wired to avoid pain. The 6 fold increase in injections means we've prevented hundreds of thousands of deaths... but tell that to a kid on the business end of a needle. 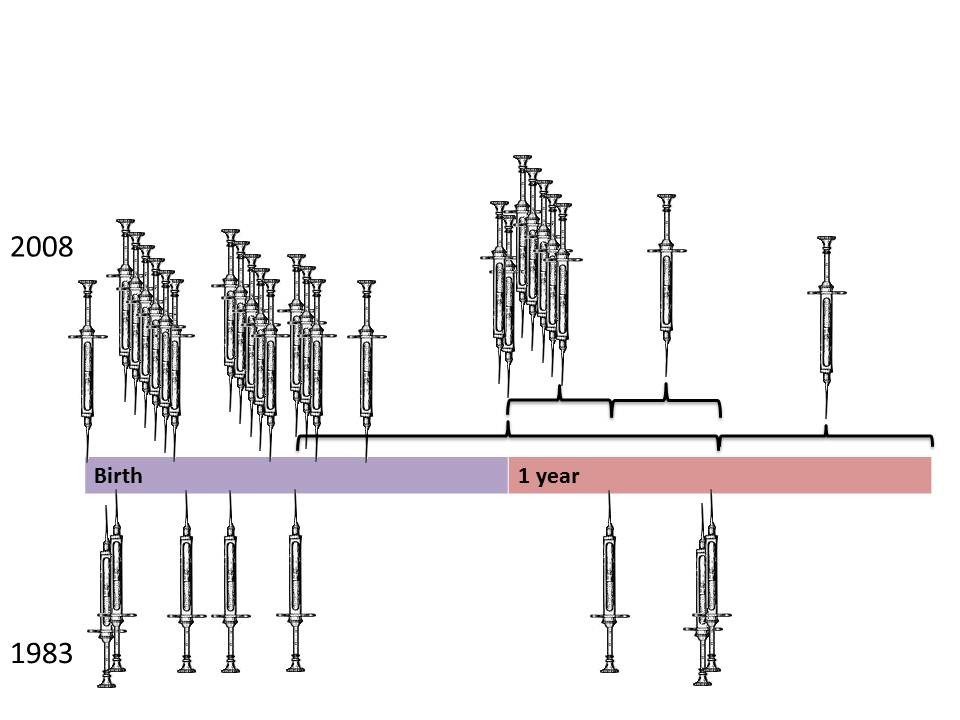 Reducing the pain of vaccination is a big deal, not just for flu. Research supports that the more shots kids get at once, the more distress and pain they have. For anyone, four wasp stings at once leaves more of a memory than one wasp sting every month or so. When you're overwhelmed, fight or flight kicks in. One shot, shake it off. Five? Fight or flight.

The issue comes when the child grows up and begins taking responsibility for their own healthcare. Research published 6/2017 shows the number of injections on one day between the ages of 4-6 years is correlated with fear 5 years later, and persisted to influence HPV uptake over the next 3-5 years. Preschoolers who got one or two shots on repeated visits were significantly less likely to be afraid. Phobias, once formed, persist. Pediatricians see this even for adolescent vaccines. The kid starts to freak; while parents may insist on one shot, if they're unsure about the vaccine, pushing TWO injections might be a fight with their teen they don't want to have. We found kids in the highest fear quartile from preschool shots were 2.5x less likely to start their HPV vaccine. The lack of a painless alternative for flu vaccination may impact who is willing to get both the flu vaccine AND... HPV? Meningococcal? Name your other vaccine, and the risk is that not having a FluMist nasal option may decrease vaccination overall.

We need to address the pain of injections so the association between healthcare and comfort is stronger than the abstract "this will hurt now but it's good for you". A Canadian task force has researched hundreds of clinical trials trying to reduce the distress of life-saving vaccinations, and now has evidence based ways to address injection pain. There are several reasonable solutions that don't alter the vaccine schedule. We can teach nurses how to use distraction to decrease pain, teach parents how to help kids cope with comfort positions, and use other pain relief devices to reduce the impact of multiple vaccines. Spreading out the 6 injections to two each at the 4,5,and 6 year visit would take political will and a change in insurance policy, but wouldn't change the efficacy or vaccine schedule. Dr. Christine Chambers has started an initiative in Canada bringing "It Doesn't Have to Hurt" education to social media. What we don't yet have is a systemic method to undo the anxiety inadvertently created.

The fall out from FluMist's fall undersores the need to spread these important findings. Kids and millennials who don't like injections are not wimps. They grew up learning that healthcare hurts, a lesson we should no longer teach. Part of why millennials are signing up less for healthcare, why blood donation is dropping, and why only 1/3 of teens have gotten HPV vaccines could be that 2/3 of teens are afraid of needles. 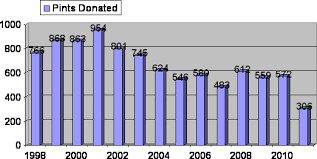 Let's start to talk about why it's natural that a 5 year old who gets 5 shots might be afraid 5 years, and 15 years, later without being a "wimp". A trip to the doctor doesn't have to mean pain. Shots don't have to hurt.

Added to your cart: